On a Mission: Building a School in Nicaragua

Yellow Duck Marketing is proud to have partnered with nonprofit buildOn and The Goodyear House to help build a school in Cerro Verde, a remote mountain village in Nicaragua. The current school, composed of disjointed wooden planks and a dirt floor, is a single room that serves more than 40 children. The new school currently under construction will be much larger, built of concrete to withstand weather, and will undoubtedly impact the future of children and community members in Cerro Verde.

In April, the YDM team along with team members of The Goodyear House traveled to break ground on the school building, which will be completed in two months.

Each day in the village was an opportunity to help with construction, as well as interact with community members to learn more about how they live. Here is an overview of our day-to-day life in the village:

We landed in the capital city of Managua on Sunday night. We met our trek leader, Candice, along with other buildOn team members, enjoyed a group dinner, talked about our plans for the following days and rested before the start of our trek.

It’s Monday morning and the team is loaded up into the school bus – affectionately called the “chicken bus” in Nicaragua – to start our 4-hour trip to Cerro Verde in the mountains. We were on the road for about 2 hours before stopping in La Dalia for lunch. In Rancho Grande, we switched to 4×4 trucks to take us the rest of the way up the mountain, directly into the village. The dirt mountain roads were too steep and narrow for the chicken bus.

When we arrived at the village, we were met with friendly faces from the community for their opening ceremony celebration. We got to experience cultural dances and speeches from community members and the mayor herself. Two buildOn staff members – Ulysses and Raul – served as translators throughout the trek, translating Spanish to English for the American team and English to Spanish for members of the village. The buildOn team, volunteers and Cerro Verde community members then signed a covenant to ensure the construction of the school.

After the opening ceremony, we split up and got settled into our sleeping arrangements. We (the girls) stayed in a wooden plank church with a dirt floor that in spite of its rustic setting offered beautiful views of the mountains surrounding Cerro Verde. Once we got unpacked and set up for our first night in the village – side-by-side canvas cots enveloped in mosquito nets to protect us from malaria – we headed up a small hill for dinner as a team and then called it a night to prepare for the next day of work!

Our wake-up call every morning in the village was around 5-5:30am, at sunrise, with enough time to brush our teeth, get dressed and head up the hill for breakfast at 6am. We ate breakfast as a team and enjoyed the beautiful Cerro Verde views from across the hill. School build work started promptly at 7am. Our first official morning of work consisted of digging square holes six feet deep, shoveling and tying rebar cages together. BuildOn field coordinators and construction workers guided us in each work activity so that we were all knowledgeable in each activity.

Following the on-site work, we had free time from 11am-12pm, where some of us opted to lie down, read or try taking a “bucket shower.” Because the village had no running water, we walked to a small wooden structure similar to an outhouse with a barrel full of water, used a smaller bucket to dump cold water on ourselves, soaped up and then doused ourselves with another small bucket of water. After working so hard in the dirt and hot sun, a bucket shower was amazingly refreshing.

Each day after lunch, we participated in cultural activities. On Day 2, we toured a coffee farm in the village, led by 20-year-old Yeyson, who showed us his coffee plants that were seedlings to several years old and their green coffee beans, which wouldn’t be harvested until later in the year. Known for its coffee, Nicaragua has a balance of natural resources and micro climates that allows facilitation of coffee bean growth, which thrives in mountain elevations. Yeyson said the elevation of Cerro Verde was ideal for growing coffee, which is Nicaragua’s largest export. 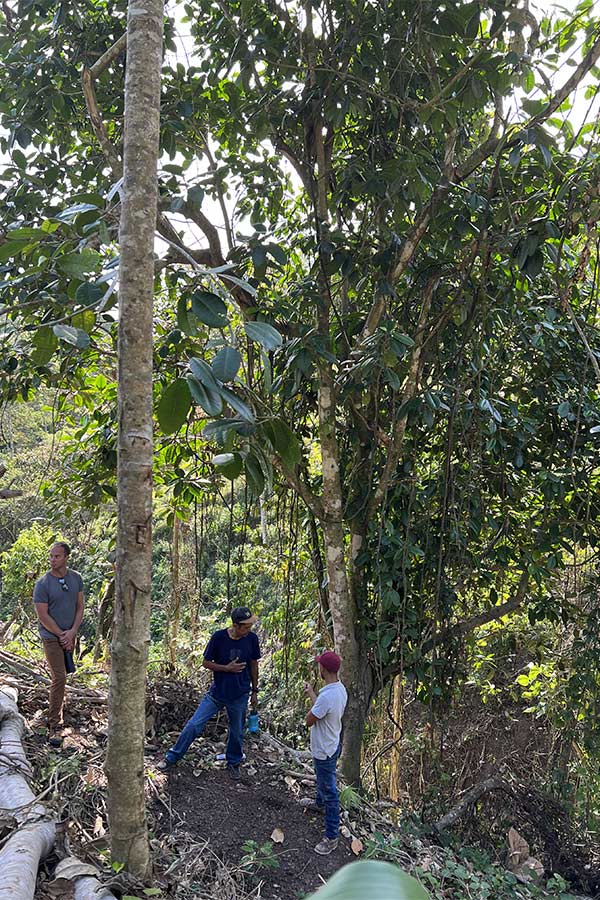 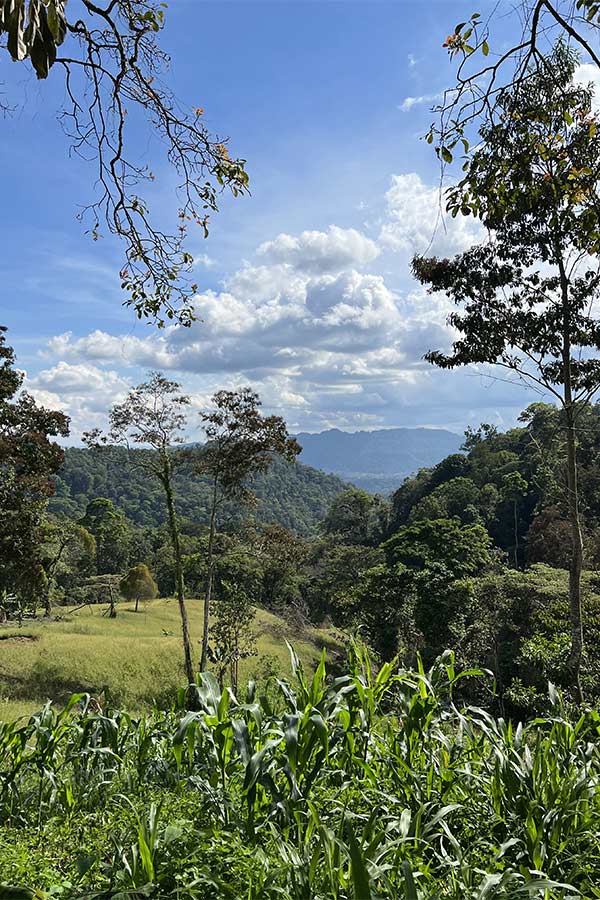 Following our coffee tour, we came back to freshen up and get ready for dinner at 6pm. Since Nicaragua is close to the equator and doesn’t observe Daylight Savings Time, it gets dark pretty early. There is no electricity in the village so by 7pm it was pitch black. After dinner, we had to pull our flashlights out to make our way down the hill and back to the wooden church. After the intense day of work and sun, this was an early night for all and we went to sleep around 7:30pm for an early 5am wake up call the next day.

We woke up on Wednesday around 5-5:30am, freshened up and got ready for another work day in the village. After breakfast, this day on the worksite consisted of continuing to dig to finish up our holes from the prior day, continuing to tie rebar and sifting sand for the concrete mix. We continued to rotate through work stations so that we were all given a chance to try each station out.

We experienced a bit of rain on Day 3, after our work hours. Things got real muddy, so we switched into knee-high rain boots provided by buildOn for the remainder of the day. We headed up for lunch and we got to talk to community members, first the women and then the men. It was an eye-opening conversation for all of us. The women in the community were more talkative and told us about how long they’ve been in Cerro Verde, what brought them to the community and we also talked about their dreams and aspirations – from a better education for their children to making more money to moving to the United States. We then talked to the community men and while they were not as talkative, they shared the same optimism and happiness that the women had. The people in Cerro Verde are happy people, who work hard and enjoy helping each other out.

After we met and chatted with the community members, we used our free time to take bucket showers and were met with a downpour of rain for several hours. Luckily, we were on the property donor’s land, where we hung out and talked on his porch while we waited out the rain. We headed to dinner at 6pm up a muddy hill due to the rainfall. We had dinner as a team and then it was an early night for us all as we tried getting back to the church before the rain started again.

This was our last day in the village! We headed up for breakfast one last time before heading back to our last day at the worksite. Unfortunately, the intense rain from the night before filled many of the holes and permeated the concrete that was still in the process of drying, so we had to scoop the rainwater from the holes and remove the concrete before starting over again. The rebar cages were placed in the concrete so by the last day, we were able to see more of the structure of the school. A few of us learned how to cut and bend metal for the rebar cages and continued to sift selected material for the concrete mix and tie the rebar together. 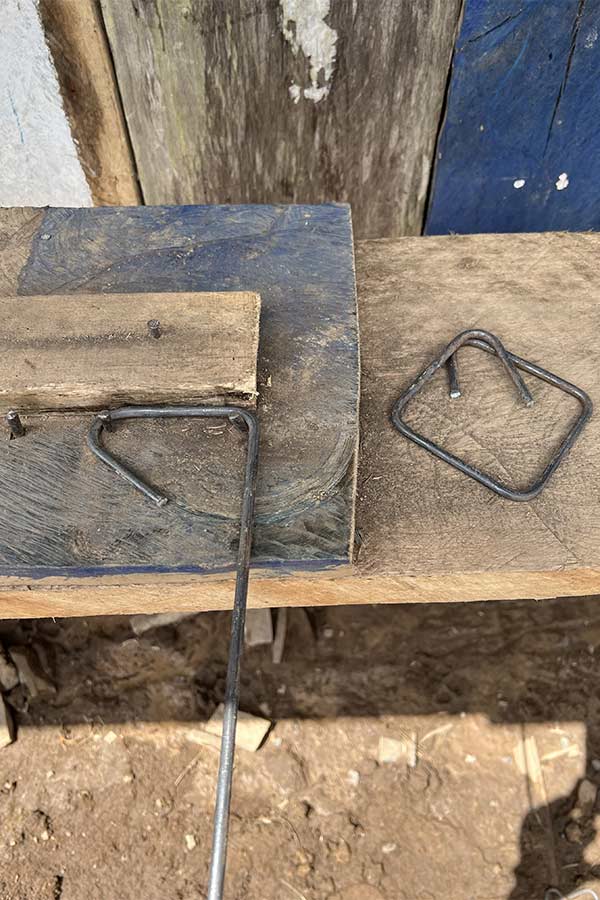 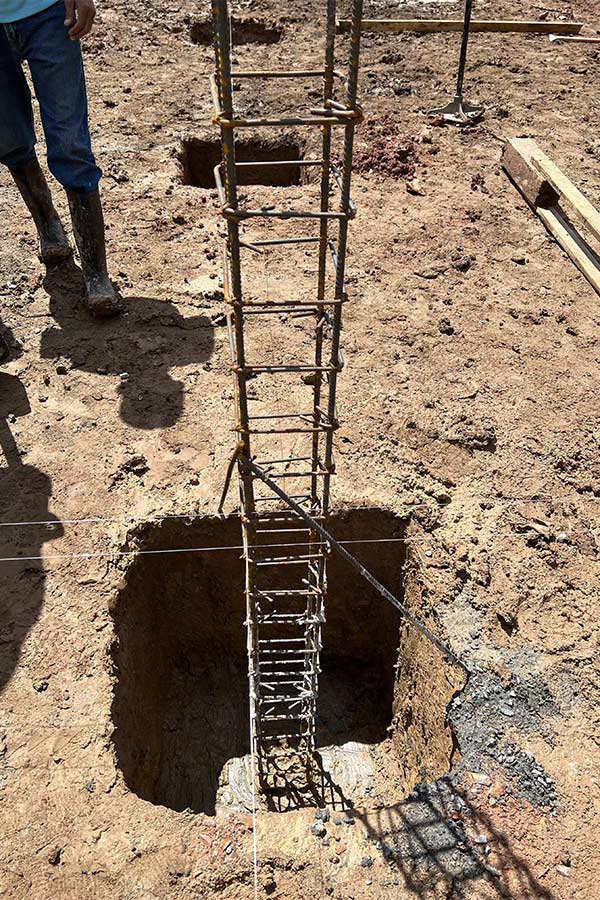 After we said our tearful goodbyes to the community members, we packed up the trucks en route to Matagalpa, where we stayed the night. On our way down from the mountain, we actually stopped to see a fully completed buildOn school in another community not far away. It was impactful to see an already completed school and makes us excited to see ours when it’s finally complete! 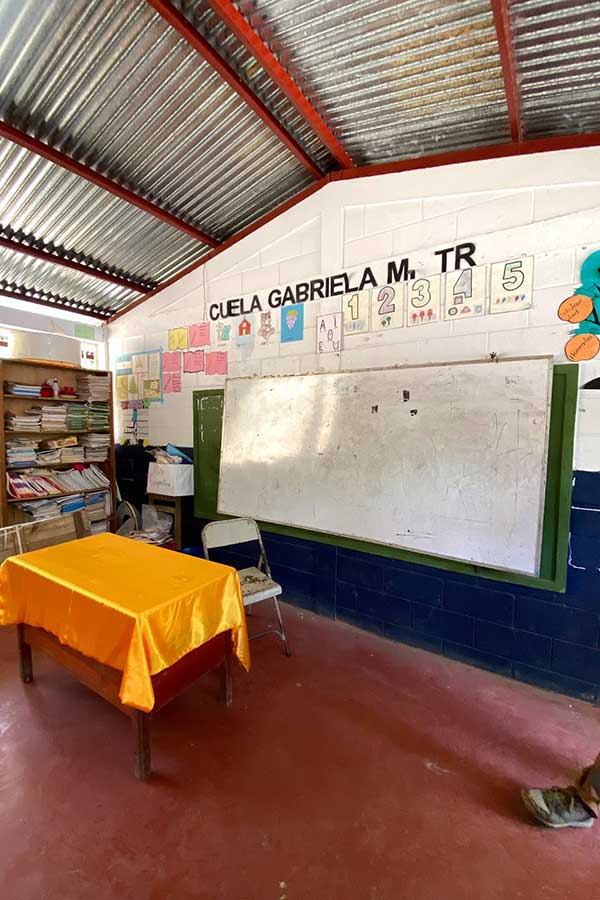 On our last day, we had a 2-hour drive from Matagalpa back to the capital city of Managua. We got there early and complied with airline guidelines for Rapid PCR COVID-19 testing. Once we finished testing, we did cultural sightseeing in Masaya where we visited Masaya Volcano, Nicaragua’s first and largest national park. Once we left the park we headed to the Masaya market for quick souvenir shopping and had one last dinner together at a restaurant in Puerto Salvador Allende on the shores of Xolotlán Lake. 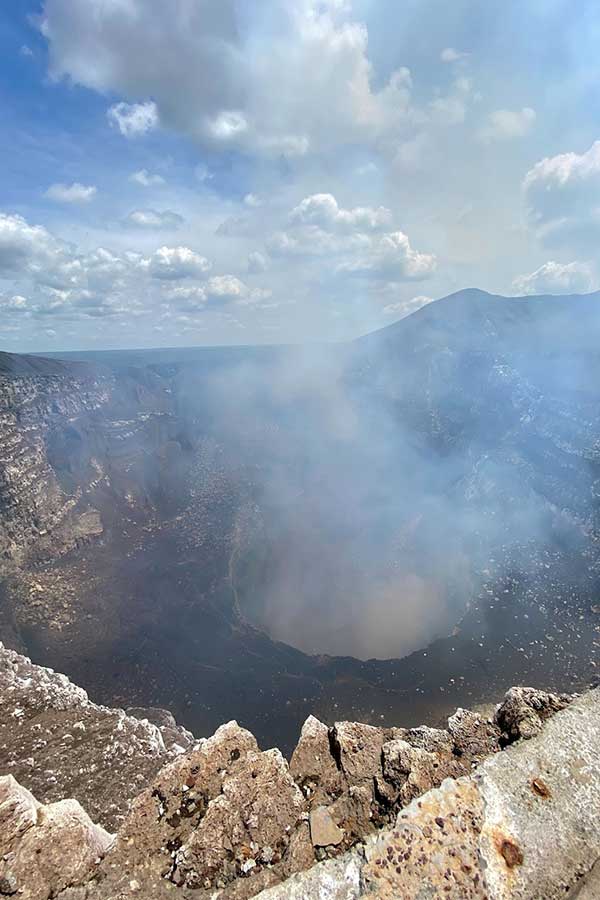 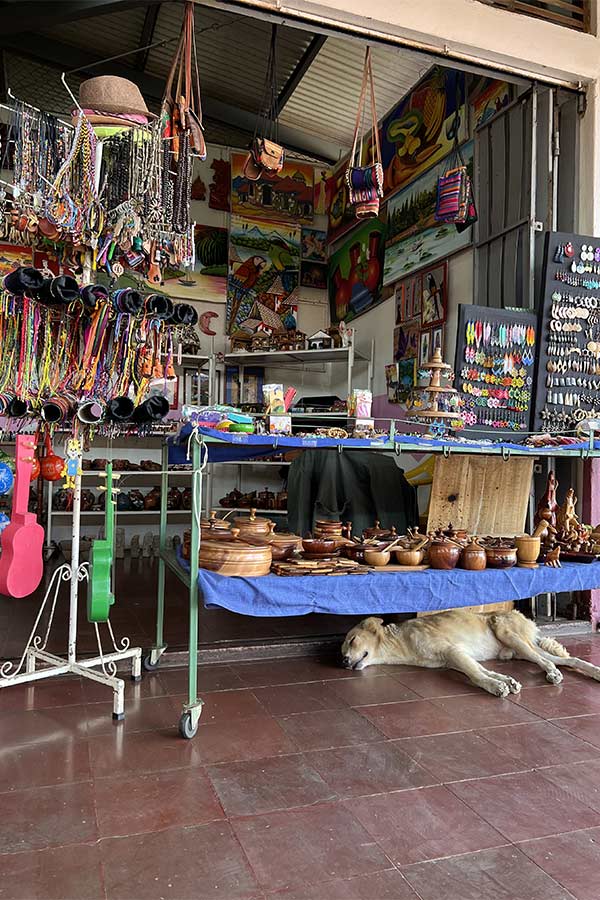 We woke up early to fly back to Miami and then to Charlotte to enjoy a hot shower and sleep in our own beds.

For all of us, this was a once-in-a-lifetime trip. We’re grateful to have been able to be a part of buildOn’s global impact and for the opportunity to work directly with the community. Being able to provide a community with better education is one of the reasons that Yellow Duck Marketing is a mission-driven agency that feels passionately about improving communities. Here’s to our next trip!

If buildOn’s mission is one that you would like to support, we encourage you to share this blog with someone you know or donate directly to buildOn. 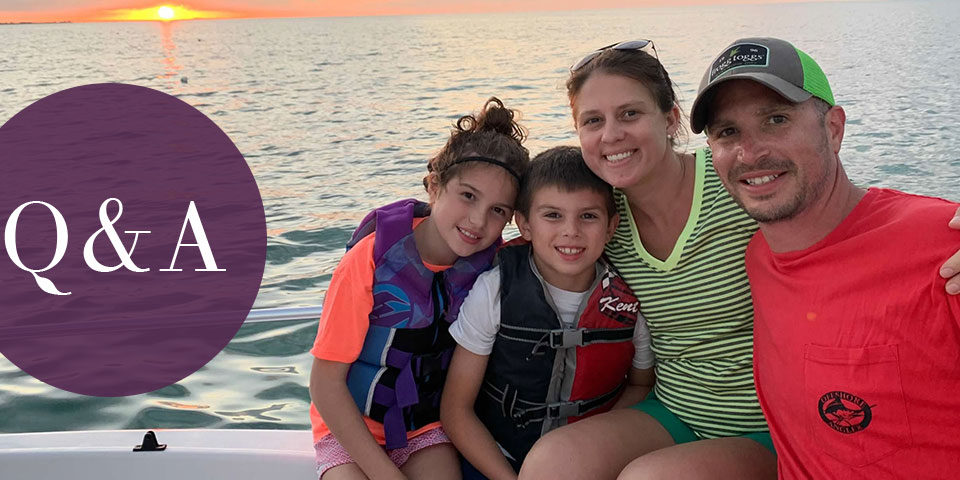 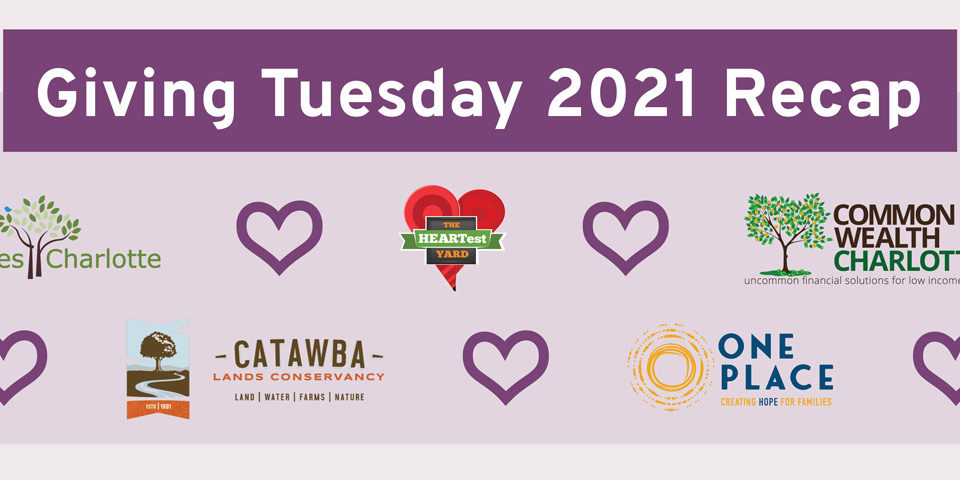 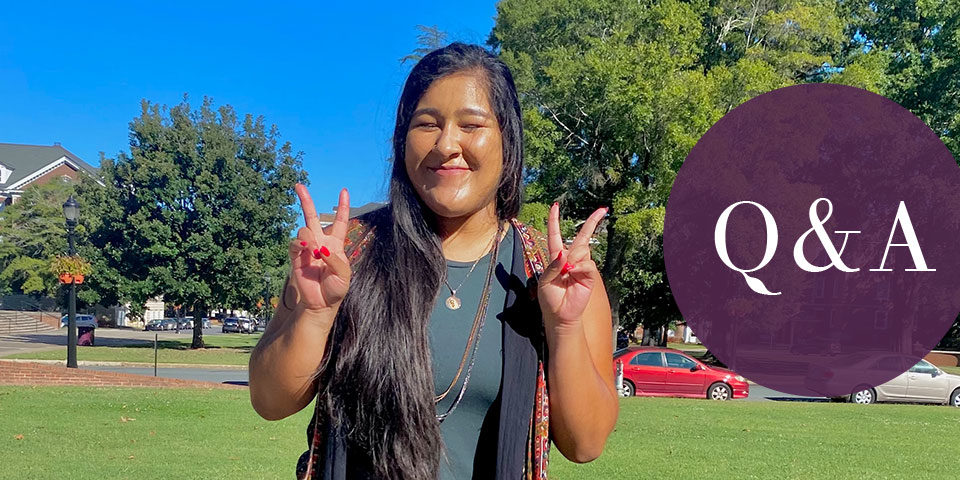